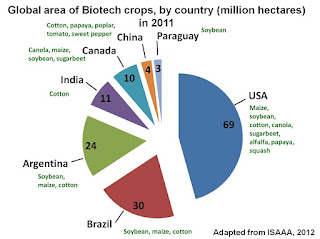 In the last 30 days a couple of countries, through their national authorities for risk assessment, have clearly positioned themselves against the scientific validity of Séralini´s paper. Indeed, these authorities have published technical opinions stating that Séralini´s pledge (on feed made with GM corn inducing tumor in rats) was not supported by his published data.

Now Brazil, the second largest GM crop grower in the World, also officially rejects Séralini´s results.  The Brazilian CTNBio makes public its opinion on the work of Séralini and his collaborators (see below). The opinion is in many points similar to that made public by concerned Brazilian researchers some weeks ago (http://genpeace.blogspot.com.br/2012/10/pesquisadores-brasileiros-assinam.html, in Portuguese)
_______________________________________________

Summary
In an overall assessment, this study represents a strong commitment to assess the consequences of a diet with genetically modified (GM) plants, exposed or not to the herbicide to which they are resistant, as well as with the herbicide itself, to rats after a long-term treatment. Results generated could potentially bring valuable information about the issue raised by the authors, however, the study completely fails to reach such purposes, due the following main reasons:
(1) The rat strain was poorly selected for the study, inasmuch as it is known that Sprague-Dawley rats develop tumors spontaneously in greater frequency than other strain (Keenam et al., 1979). The choice of another strain would have given greater consistency and reliability to the set of results of the study.
(2) Results are dramatically described and illustrated in a non-conventional fashion, leading to a relationship between feeding on GM plants and higher mortality or appearance of tumors, without, however, presenting numerical data in most analyzes, or statistical analyzes that inform the level of significance of the data presented in a general way. A study of the document shows that the expression "statistic" appears only twice: in item 2.6, "Statistical analysis" in Materials and Methods; and in item 3.3 (Results, biochemical analyses), in the phrase "For biochemical measurements in rats, statistical analysis". This confirms that data presented as regards biochemical parameters were the only results submitted to statistical analysis, even so, rather unclear.
(3) Other points recommend caution with respect to the study, such as:  Lack of a definition of the control maize lineage, described only as "closest isogenic maize" (Table 1); similar results are observed with GM maize treated or not with the herbicide and with the herbicide itself, without dose-effect relation; the number of animals per group is very small (10 males and 10 females), particularly considering specific sex differences; for several of the results, groups "treated" (n=90) are compared with "controls" (n=10) for each sex, while control and experimental groups should have similar sample size.
Finally, the review of the study indicates that based on the results presented it is not possible to establish any conclusions about the long-term effect of feeding on GM maize, treated or not with the respective herbicide, in rats. To this end, the findings should be described more accurately and submitted to a consistent statistical evaluation.
Therefore, this opinion indicates the main technical limitations, which invalidate the findings presented by the authors.
_____________________________________________________
Please access the following link for the full text (903 kb, pdf file):
http://www.ctnbio.gov.br/upd_blob/0001/1725.pdf
Postado por http://genpeace.blogspot.com às 14:58