The first funny statement is that the time has come to choose between a GM based, or a non GM-based, world food supply. Why should the world choose between two technologies? Hundreds of competing technologies are now running smoothly in our good Earth. Exact the opposite: when only one technology is available, we get in troubles. Imagine the energy scenario if power plants were all driven by coal (as in the 19th century)? Or if agriculture relied only on primitive, low producing landrace seeds? Or if we were still dependent on tillage for every plantation? The list can go forever. The coexistence of different technologies is one of the main bases of human technical development and it is silly and bigoted to think otherwise, as GMWatch seems to do. Let us further understand their very strange arguments (in blue, below).

1.        GM foods won’t solve the food crisis
Sure, they will not, as well as NO OTHER SINGLE TECHNOLOGY! Food crisis is complex and GM crops are surely much less important than many other critical issues, as plant pests, soil erosion, food transport and storage, food processing, feed production and many, many, other relevant issues, By using this simplistic and biased approach and since no other technology can, alone, solve the food crisis, we should ban all of them and just starve to death…

The argument used by GMWatch is a mess: it starts with biofuels and tries to blame GM technology (no GM food, in this case) for that. In most countries the biofuel is, indeed, ethanol, and it is produced from sugarcane, which is not transgenic and it is in the World marked for 500 years. The biofuel question is a serious issue, but should not be mixed with the GM technology. By doing so, GMWatch purposely blurs the scenario.

2. GM crops do not increase yield potential
The generalization of a certain trait to all GM crops is misleading. Every trait derived from the transgenes has a specific purpose. Indeed, none of the common traits are designed to increase yield, not even the yield potential. They have been introduced to
a)      Confer herbicide tolerance
b)      Make plants resistant to specific insect pests

As a consequence, the adoption of transgenic plants reduces losses due to insect attack and costs in controlling weeds. This does not mean that yield will be increased, but has another important consequence for the farmer: costs may be reduced. The practical proof of the usefulness of the technology is its massive and fast adoption worldwide: more than 170 million hectares are now GM.

New traits are coming to life and soon the farmers will evaluate true GM crops with increased yield. To insist in this old story is, again, silly and purposely misleading.

The answer to the first question is NO, if the GM plant has an insect-resistant trait. It does not zero the use, but strongly reduces it.
The answer to the second question is NO, if the GM plant displays herbicide tolerance. There is a change in the herbicides used in the field. Usually GM plants are made tolerant to glyphosate, ammonium glufosinate or 2-4-D. As expected, the use of these herbicides increased very much. But, on the other hand, the use of much more toxic herbicides went down. Therefore, we may conclude: changes in absolute volumes are not significant (up or down) by crop area, for every crop, but there is a clear shift towards the use of less toxic herbicides. Moreover, one should consider that the total acreage of crops (either GM or not) increases every year and pesticide use must increase accordingly.

GMWatch puts all pesticides in a same pack for the discussion and end up, as planned, with a very confusing argumentation to support their plea. Bad for the readers…

4. There are better ways to feed the world
Here, again, GMWatch wants to tell human beings what are the “good” technologies and what are the “evil” ones. This is absolutely right in terms of ideology, but is it wrong as a scientific argument. In a free human society the market decides what is good and what is bad, as soon as a product is approved by the regulatory agencies. This is true for cell phones, cake and bread, vitamins, airplanes or condoms.

There are dozens of technologies aimed at feeding the World population, including aquaculture, mushrooms, recycled food trash, deep see exploitation, the use of algae to harvest solar energy and convert to food and many, many others. All of them may contribute to feed the World. It is truly dictatorial, antidemocratic and highly pretentious to fight for the ban of any technology because, in someone´s mind, there are others which may be better for the envisaged goal. The decision should be based on experimentation and observation and be taken by the society itself and certainly not by groups representing a specific ideology.

5. Other farm technologies are more successful
When different technologies apply to the same problem, as said before, it is stupid to argument that one is superior and all the others should be discarded. Technologies may have niches, may be adopted for a certain period, almost disappear and suddenly come back again, and this dynamics is determined by the market. Integrated Pest Management, for example, is not concurrent to GM crops, but truly complementary, as well as many other innovative methods, as no tillage management.

The argument against GM technology for agriculture is, moreover, inconsistent: GM crop adoption in Brazil, the second largest GM producer, spiraled up to large percentages of adoption. Nevertheless, the Brazilian corn seed market offers, for example, more than 200 varieties and cultivars and less that 50% are transgenic seeds. This implies that the adoption is voluntary and driven by higher profits for the farmer. Someone could argue that this higher profit means a larger environmental impact than the one derived from non GM plants in the same management system, but this is simply not true.

6. GM foods have not been shown to be safe to eat
This is simply not true. Food safety of GM corn, soybean, potato, etc was assessed by many different risk assessment agencies all over the World. All came to the same conclusion: GM food/feed (i.e., food or feed having GMO products in their composition) are safe for both humans and animals.

Genetic modification is not a crude and imprecise way of incorporating new traits, as GMWacth claims. Such a statement can only have origin in ignorant minds. Moreover, only ill designed experiments, like the paradigmatic 2012 Séralini study, show any harm associated with GM food. As GMWathc and other organizations keep parroting the same stories again and again, in spite of having been discredited by the scientific community, the lie is reinforced and sold like an irrevocable truth. Again, bad for the reader…

7. People don't want GM foods – so they're hidden in animal feed
Except in Europe, people eat gladly GM food, from popcorns to elaborated industrial food, especially in USA, Canada, Brazil, Argentina and Australia. GM corn is also to be found in beer and other fermented beverages and GM grains indeed permeate the whole food chain. Contrary to what GMWatch says, people do not care if food is GM or not, as long as it was approved as human food by the competent national authority.

The last statement (animals fed GM feed are different from those fed a regular no GM food) is absurd and a gross lie. What is the purpose of this farce?

8. GM crops are a long-term economic disaster for farmers
GM crops are in USA, Argentina and Brazil for more than 10 years now. The ratio of adoption in Brazilian agriculture increased steadily and reached for soybeans almost 95% and for corn 75%. GM cotton is also increasing, although in a slower pace. Adoption is driven by a previous history of success and by the need of the technology. There is presently no evidence that GM technology will lead to any disaster. Evidently, some traits may be substituted by better ones, in some regions a given trait may be made useless due to resistance, etc. But these are cases that may happen to any technology and hardly will be such widespread problem as to be classified as a disaster. Again, only people really ignorant of agriculture or purposely misleading can say something like that.

9. GM and non-GM cannot co-exist
This is plain bullshit, deception and nonsense. Gene flow is a very well know phenomenon and the agriculture rules to avoid or minimize it have been established long ago. Moreover, seed production has very strict rules and seed contamination is a very rare event. Obviously, if a farmer transgresses all the rules and does not follow even the common sense, he will get in troubles. Again, this argument can only come from people very ignorant on the premises of agriculture.

10. We can’t trust GM companies
The fear from GM companies is a “religious” trait, like the fear from the devil. We have to be careful when buying every product, from an organic sprout to an industrial cell phone. But we should not a priori blame the company. Moreover, the new trend will certainly be the arrival of new, small and even government owned companies in the GM marked (see the case of Brazilian Embrapa 5.1 bean). Are all of them devilish? This is again bullshit, deception and nonsense. 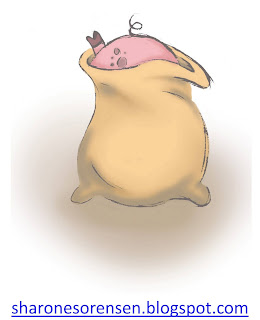 To make a long story short: what GMWatch is tryingto do is to sell a pig in a poke. Our conclusion (as always in this blog); when science is substituted by sheer ideology, the conclusions are not supported by data. They may be valid under certain very special conditions, but are definitely outside the reach and the scope of a scientific forum.
Postado por http://genpeace.blogspot.com às 13:35